Why Did Patrick Murphy Pitch to Jenna Rodriguez? 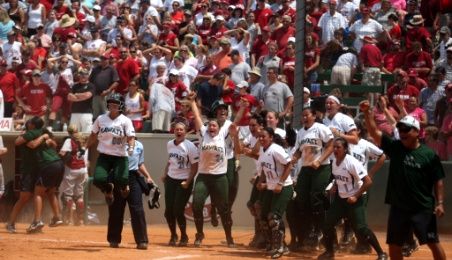 Why, oh why, oh why did Patrick Murphy pitch to Jenna Rodriguez? I’m not trying to be mean, it’s a question that almost everyone was wondering about at one point or another (maybe even Pat Murphy himself!).

I know this is not the most timely time to ask this question, it all happened months ago, but it just happens to be one of the random thoughts still bouncing around in my head now that the major softball-playing part of the year has come and gone.

WHY did Pat Murphy opt to pitch to Jenna Rodriguez in the bottom of the last inning of the last game of the Tuscaloosa Super Regional 2010? She already had all the RBIs for the game including a 3-run home run in the 1st inning.  I honestly did not think Pat Murphy was going to pitch to her.

I was sitting in the car listening to the game unfold on the radio and they were talking about how Jenna Rodriguez would be up to bat soon and no way did I think that she would actually get a chance to hit.  But I was wrong. I didn’t mind being wrong, of course, because I was cheering for the University of Hawaii Rainbow Wahine.  But I have to admit, I was absolutely stunned that they pitched to her.

So why did Pat Murphy decide to pitch to Jenna Rodriguez?

This may not be something that we outsiders ever know the true answer too, but here are some things to consider…

1.  As a coach there is so much more that factors in to your decisions than what “outsiders” see.  (Anyone not INSIDE the team environment day in and day out is essentially an “outsider.”) It may seem very simple and very cut and dry from the outside looking in, but none of us truly know what what going on “inside” the team at that time.

2.  At the end of the day, if you can’t “trust your gut” as a coach, you’ll be second guessing every decision you make every day of the week.  That’s no way to live or coach.  Many times you just have to weigh the factors, take them into consideration, then go with your gut tells you based upon the information you have.

3.  If Pat Murphy was guilty of anything, it was probably believing in and having confidence in his team and his players.

Is this a major character or coaching flaw?  Some might say it is.

I don’t agree. I have been in situations and seen other coaches in situations that made this same “mistake.” We have a player in a clutch situation that we know has the ability to come through and we believe with absolute certainty that they will.  So…maybe we don’t make the call we “should” make.  Maybe we don’t make the “textbook” coaching decision that most coaches would make because we believe that this player, at this time, will come through and shine the way they have the potential to or the way that we have seen before.  Sometimes we’re right.  Sometimes we’re not.

The truth of the matter is, you’re NOT going to make every right call and every right decision as a coach.  No matter how hard you try, no matter how great a coach you are (and I do believe that Patrick Murphy is one of the best), it’s just the nature of coaching. Some you’ll win, some you won’t.

As far as I’m concerned, I’d much rather make that “mistake” or that “wrong” call based upon the fact that I believed in and had confidence in my team, rather than because I was playing it safe or because I doubted or didn’t believe in my players and my team.

If, as coaches, we are undoubtedly going to win-some-lose-some anyway and there is no way we are going to make every right call, I at least want to know that my “wrong” calls were made based upon something I believe in and can live with.