How do you get your players fired up? 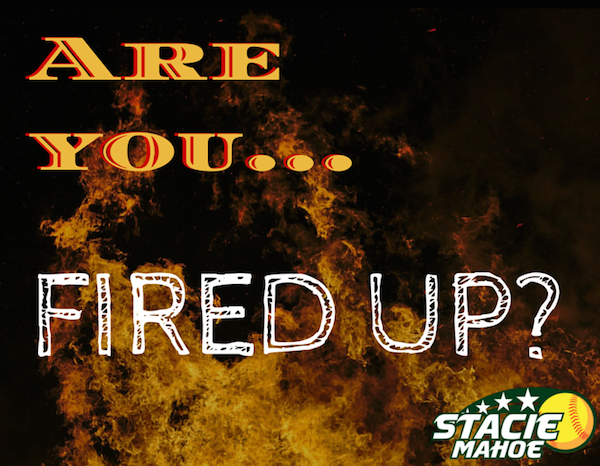 Every now and then, I get questions about motivation and inspiration.  The inquiries typically go something like this…

Hey Stacie, need some advise. My daughter plays on a team with great heart, but they need more aggression. Could you suggest something to my daughter to get fired up?

When I hear this question, my first thought is: Does she have a goal?

If there’s no purpose, nothing to get fired up about, why would someone get fired up? Players must have a reason to be fired up before the get fired up. And it must be their reason, not their coaches, not their parents’, not their uncles’, not their aunts’…theirs. If they have that reason, the fire will be there. We just have to make sure we add kindling and don’t snuff it out!

Understanding what it is they really love about the game helps you do that. Focusing on those positive attributes vs constantly critiquing the negatives of their experience goes a long way toward keeping players “fired up” about what they do.

Some players are “fired up” but show it differently that you might expect. If a player obviously loves the game, then she’s likely “fired up” in her own way. I remember my dad always telling me I needed to be more aggressive. I guess it was because he couldn’t see it on the outside. But that didn’t mean I wasn’t thinking all the “right” thoughts at the right times. My approach allowed me to perform well, especially when it mattered most, even though my aggressiveness was, apparently, well hidden from others.

It’s not a “bad” thing either way necessarily, just different. Different players, different strengths, different weaknesses. All valuable, and vulnerable, in their own ways.

Then you have players who simply don’t play in a manner that others would describe as “fired up.” It’s just part of their nature to be a calmer, steadier competitor. Not as many highs and lows, but rather a nice even keel, which also has it’s merits.

Still, in other cases, players aren’t “fired up” because softball just isn’t their passion.

If that is the case, understand that you won’t produce fire from wet wood.

Passion and fire come from the player.  It’s not something given to them by someone else. Can you help draw it out? Yes. But you can’t do that if it’s not there to begin with. And there’s nothing wrong with that! That player will get fired up about something, it just doesn’t happen to be softball.

Also, at the 8U or even 10U level, players simply need a little more time to get to that “fired up” phase. It could just be age, or inexperience, that leaves them seeming less “fired up.” If they’re still trying to figure out how to play the game, chances are, all their energy is focused on that. Allow time for them to have fun, explore the game at their own pace, and fall in love with it in their own way. The rest will come once a strong love and enjoyment of the game is established. Nothing else “high level” happens without that. And everyone knows, you can’t hurry love.