This clip is a direct result of a discussion going on at DiscussFastpitch.com. In this clip I do a little experiment to see just how “easy” it is to reach a runner sliding away from a defender if a defender is “giving up” the basepath by standing to the inside.

One poster over at DiscussFastpitch.com said that I would be surprised at just how much territory can be covered if a defender is standing off to the inside of a basepath (in order to avoid obstruction) basically saying that an average person would have the reach to make a tag from this position.  I was arguing that the defender shouldn’t have to give up that lane and make things easier for the runner.  This person was trying to tell me that the defender can still be make the play even if they do give up the basepath.  So I had to do a little experiment to see if that person was right.

Another issue that came up was path to the bag/plate. Some coaches feel the best route to a bag is always directly at it – why go any other way?  Find out in this video.

If you want to be able to:

This is a must see video clip. Plus you’ll see why I disagree with the coaches who think that a direct line to the bag is always the best route.

Here is the math I used to figure out how much farther an “out route” is as compared to running direction from one base to the next. 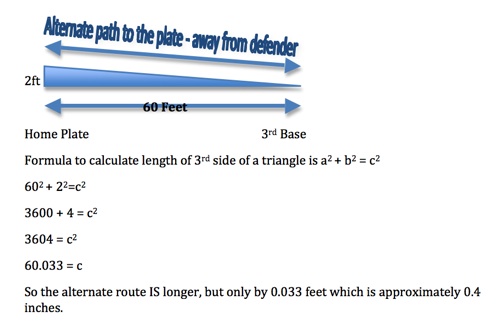 Last Note: I’m not saying that running to the “outside” is always best.  If the defender is outside, then running to the inside would be better (i.e. you tag up on 2nd and are running to 3rd and 3b is receving the ball from left-center).  Point is, as a runner, make the play as tough for the defense as possible by not running straight into the tag.  Choose a route that will make the defense work harder to apply the tag on you.