The Best Way to Get Through to Your Players Is… 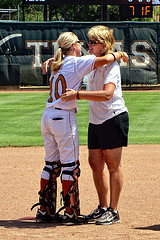 …show them you care.  I’ve said this before.  You can know everything there is to know about softball.  You can be giving a player the best advice she’s ever gotten, but if she doesn’t feel like you’re doing it to help her it may be falling on deaf ears.

Now it doesn’t have to be all hugs and kisses like the picture shown here.  Even the toughest coaches out there can be respected and even liked by their players as long as the players know that the coach honestly cares about them and it doing his/her best to help them become the best they can be.

It’s not about how hard or “soft” you are as a coach that matters.  It’s where your heart is that makes a bigger impact on players.  If you want to have the biggest influence possible, it doesn’t matter how much you know until players believe you are truly there for them.

As people, we all have BS meters. That’s why we don’t trust many of the salesmen we meet, but when we come across one we trust and like, that salesman just picked up a customer for life!  Guess what?  Players have BS meters too, but when they meet a coach that passes their BS test with flying colors, most times it’s the beginning of a lifelong respect for that coach.