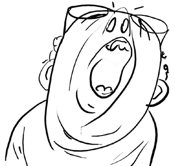 What ever possesses parents to sit right behind the backstop, practically next to the dugout, and yell and scream (I can’t even call it “cheer”) for their team?

And what possesses coaches to allow that?

That is coach/team space, not parent space.  Seeing a bucket brigade of about 6-8 over-the-top dads sitting there being loud and close to obnoxious all game long is just not cool in my opinion.

I completely and totally back parents who passionately support their team in a positive, although intense, way that maintains respect for the game, the opposing team, and the umpires.  I really can’t see allowing parents to be borderline obnoxious and borderline disrespectful in such and up close and in-your-face way.  I’ve even seen this type of fan behavior in pre-season tournaments too!  Really people, the outcomes of those games really don’t mean that much.  Then again, I don’t think there’s any situation in which I’d agree with that type of parental “involvement.”

It’s like, since the can’t play, they are going to do as much as they possibly can to be a part of the game from the outside through the use of their voice.  It’s like they want to help defeat the other team with a game-long, very vocal barrage of “support” for their team.  Not cool.  That’s not your job as a softball parent.  Let the GIRLS play! It’s not your turn to take part and “play” youth sports.  Your time has passed.

One time I actually thought the row of guys sitting there yelling to the players were all helping with the team as assistant coaches.  Since they all had team related shirts on I really couldn’t tell which ones were coaches and which ones were parents.  There was no separation between team and spectators.  After the game ended they all got up (about 7 of ’em) picked up their buckets and walked over to their wives and/or families who sat in the stands and watched the game like the rest of the normal people.  The real coaches (only 3) stayed with the team to shake hands with the opponents after the game.

It just boggles my mind and rubs me the wrong way when parents or adults act like this.  I just don’t get that kind of behavior from grown ups.  Then we wonder why some players lack respect and class.