The reason I’m thinking about this issue is because of an article I saw shared on Facebook: I Am Your Coach, Not Your Mother.

*NOTE: Let me be clear. This is in no way an attempt to put down the author of this article. That is not at all my intention. I’m simply sharing the thoughts and feelings this article stirred up within me due to various lessons I’ve learned.

Good articles do that. They make you feel something.

This blog post is an accounting of what I felt as I went through this article. There are some solid pieces of inspiration in the article, but some parts just, well, you’ll see…

Truth be told, not long ago, I probably would’ve written an article exactly like this.

Now, I have a different perspective. Why?

Because a number of wise mentors and amazing leaders took the time to show me just how many false dichotomies we buy into. Including the one regarding coddling OR tough love.

In the article, the author stated…

I will not coddle you. I will not tell you in a sweet voice that “It’s okay.” That’s what Momma is for. I will never belittle or degrade you but I will toughen you mentally, emotionally, and physically. It will sting. It will hurt. But you will be a better athlete and person for it.

Why do people think the only options are EITHER “coddle” OR “sting” and “hurt?” Why does it have to be one or the other? (hint: it doesn’t, there’s a whole wide range of options out there besides just these two)

And “that’s what Momma is for?”

Really? Is that all moms do? We’re just here to say, “Oh, it’s okay darling” while doing nothing to help their child work through challenges and struggle?

It may sound great in the article (and it may be spot on in *some* cases), but it’s not the most accurate representation of most sports moms.

In addition, in my experience, kids of all ages do not enjoy being “indulged” by people they look up to.

Not even their parents.

Most find it offensive and belittling and frustrating.

Don’t just placate me! Help me out here! Work with me so I can get better. A good parent (and coach) would do that.

The implication that only a “coach” would not belittle or degrade, but would help a player grow stronger mentally, emotionally, and physically and by constrast a parent…does none of that?

That’s what a “coach” does? But not a mother? I’ll have to disagree 🙂

I will discipline you
You will hate it. I don’t care.

Only recently have I realized that the best coaches (and parents!) don’t aim to discipline their players.

Instead, they effectively help players develop SELF discipline so they don’t constantly “need” a coach to push them or set high expectations for the purpose of making them meet those expectations (that’s not to say that they don’t expect a lot).

Great players push and aim high because they want to, not because someone is making them.

If they’re only doing it because someone’s making them, what happens when that outside force is out of the picture?

At some point they have to learn to do it for themselves. The sooner we work with them on that the better. Instead of thinking we can make them do it for years and years and, one day, when they’re off on their own, they just won’t need help anymore. It doesn’t really work that way nor does it have to be that way. We, as their leaders, can do better.

We can do it for them in the beginning, yes. But both parents and coaches, ideally, help players progress, step-by-step toward being able to do it on their own.

Kind of like helping a baby learn to feed themselves, at first you do a lot of it for them. Over time, they eventually gain the ability to do it themselves. But it’s a gradual progression. We step in a help when needed along the way, in various ways, and at various levels. Then one day, they stop needing our help at all.

Any kind of learning or development works a lot like that. But most coaches and parents view so many things through another false dichotomy…well, if I do it for you, you’ll never learn to do it yourself.

It doesn’t have to be YOU doing it for them completely OR them doing it all by themselves!  Again, there’s a whole broad range of options between those two ends of the spectrum!

You can move from one end to the other over time, degree by degree.  Otherwise you’re just using a “sink or swim” method. “I’m doing it for you” to “now I’m not.  You’ll figure it out eventually…”

Why do we think this is necessary? It’s not the way kids learn to walk or talk or get dressed or brush their teeth or much of anything else really.

Anyway, back to helping players develop SELF discipline, and the drive to push themselves and aim high because they want to, not because someone is making them…

When that happens, they often take it much farther than anyone would think to “make them.” And it all typically comes back to having a solid support system (which hopefully includes their parents and their coach) that listens to the goals of the PLAYER and helps them see the possibilities.

Once a player is on their way to working their butt off for THEIR goals because they want to, both good parents and coaches, then, help keep them there.

ROCKSTAR LEADERSHIP
Solid leadership communicates and develops positivity and resiliency. Great coaches can communicate, and live out the belief that, even though you made a HUGE mistake, you WILL learn and grow and get better because of it and I’M going to help you do that.

That doesn’t come from coaches inflicting “sting” or “hurt.” The game, and all that comes with it (teammates, fans, and opposition), already dishes out enough of that. There’s no need to add to it.

Can negativity (pain, punishment, hurt, sting, fear, threats) be motivating? Yes. And it seems to “work” fast. But that doesn’t mean it’s most effective or best for the athlete in the long run?

In fact, I’d venture to say it’s not. It’s probably easier though. I know, you probably think “tough love” is, well, tough.

But doesn’t it take more coaching skill to develop of players who exhibit great discipline without using punishment or yelling or threats or tough love?

Wouldn’t it require far more coaching skill to help players learn and grow from their mistakes and make positive changes without breaking them down more and inflicting additional “sting” or “hurt” on top of what the game already delivered?

You do not “have to” EITHER coddle OR use methods that “hurt” or “sting.”

Now, if you’re just concerned with your own record for this season and don’t really care about developing champions for life, then using negativity and pain and fear and threats is probably good enough for your goals.

But, if you’re in it for much more than that, if what’s most important to you are the LIFE lessons learned through sport, I highly encourage you to raise your skills 🙂

I recently heard Gary Vee say, “Negativity may be winning at half time, but positivity always wins games.”

But in the very next paragraphs says…

Life doesn’t do that. So in one statement implying, “well if life doesn’t do it, neither will I.” But in the very next breath emphatically pointing out coach will do something life doesn’t (fight for you).

I am absolutely for coaches being advocates for their players and agree coaches should do that!

I am in agreement on fighting for your players to be treated deservingly.

But why only in some cases do what life won’t and not in others? I mean it’s fine if you do, but then you can’t really use the life-doesn’t-do-that-so-I-won’t-either rationale to support your argument.

Yes, it is true, life doesn’t give you special treatment.

Why not be a source of strength through which players can feel valued, can feel worth it, can feel like someone is actually their side, even when “life” isn’t? What is so terrible or wrong about that? And why can’t coaches, along with parents, BOTH create a solid foundation for a player to stand strong on? To fall and get back up from?

And, I hate to break it to you, but fighting for a young lady to be treated as she deserves is exactly something a parent would do.

A lot of this “I’m not your mother, I’m your coach so ___ is what I do” sounds a heck of a lot like what a great mother would do 😉

Am I saying that being a coach is exactly like being a parent? No. But it’s not all that different either. Both are forms of leadership.

Both are about building strong RELATIONSHIPS and CONNECTION. Only when your relationship, connection, and level of engagement is STRONG can you make maximum positive impact on someone else’s life and bring out the best in them. It doesn’t matter if you’re a coach, a parent, a boss, or even a coworker, the principle holds true.

The bottom line is, any young player needs people around her who bring out the best in her as a PERSON. Good parents and good coaches BOTH have the same aim: help the child be their very best in softball and in life.

The stronger the relationship, the more you can help. Period.

It doesn’t matter what title you hold.

The exact fashion in which that is done may be different from parent to coach, but the principles behind the impact they have on a player, positive or negative, are the same.

Build relationship and connection. The rest is gravy. 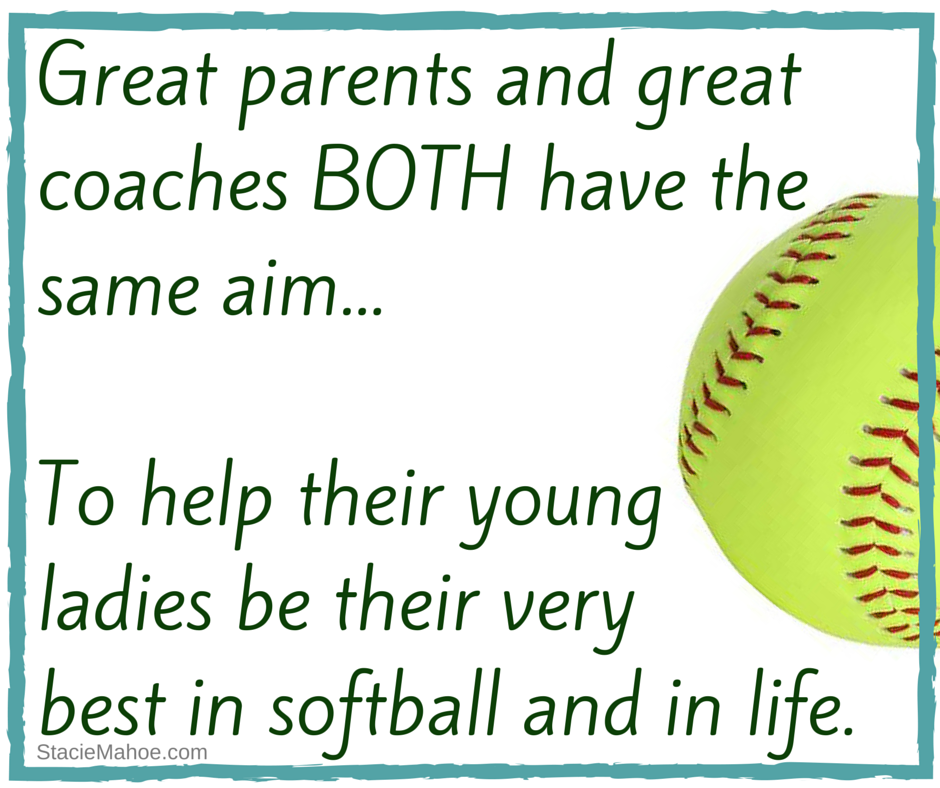