Before you call your child lazy, consider this

This inquiry came as a comment on one of my Facebook posts. Believe it or not, this is something I get a LOT. And I’ve been here before. I’ve had the “lazy” child. The one everyone looks at and thinks, “What a waste of talent.”

How on earth did my husband and I, who both competed athletically and pride ourselves on a solid work ethic, ended up with such a talented, but “lazy” child?

I’d seen so many of these athletes growing up, and heard all the comments adults made about them…

I didn’t want to hear that about MY child! I didn’t want to be the parent that had THAT child. And yet I found myself in that exact predicament. First of all, the issue of not wanting to be the parent with “that kid” was my problem. Not hers. I had unjustly thrown my worth as a parent upon her shoulders. It was not her job to prove to anyone else that I was a good mother. My issues with what whether or not I thought I was a good mother or with what everyone else would say or think were mine.

Now that I think about it all the comments I’d heard about these “lazy” athletes over the years, they sound harsh. Honestly, what gives adults the right to stand around, pass judgement, and criticize kids that way?

Adults might argue it’s the truth. Regardless, this is a CHILD you are talking about. Someone else’s child or even your own child! I’ll argue here, that if you truly think a child is lazy, you haven’t taken the time to really get to know them. Yes, I am saying this to you even if the child is yours.

Why? Because I’ve been there, done that. This is not me judging you. This is me saying that I’ve made this mistake and I want to help you avoid traveling as far down that path as I did!

That said, let’s talk about this lazyness issue. Here is the inquiry that was posted on my Facebook Page…

My daughter has a bad attitude. She’s lazy and gives up. She’s a good athlete but has a bad reputation because of her attitude. We, as her parents have tried everything. We certainly don’t condone it. It’s pretty embarrassing. Any suggestions?

My very first thought was, “Does she actually want to play?”

My daughter was exactly the same way, until we got her involved in something SHE wanted to do. Then the “laziness” vanished. Literally vanished, like into thin air. I’m not even kidding. It was like night and day. She was a totally different athlete. We were in complete shock. Then we thought, maybe it’s just a phase. Maybe it’s just the excitement of something “new.”

Nope, to this day, she continues to show us, day in and day out, year after year, that she’s not lazy after all.

I am so happy we made the effort to help her find something she could pour her heart and soul into. I also felt bad for ever referring to her as lazy.

After this experience, I don’t believe anyone is lazy. They just haven’t been guided toward the right pursuit for them yet (or maybe they have but something else is standing in their way … look up Maslow’s hierarchy).

As parents, I believe that is our job, to help our kids find what lights them up!  Rather than to push, force, bribe, or otherwise get our kid to do what we think they *should* do.

We are all meant to shine, as children do. We were born to make manifest the glory of God that is within us. It’s not just in some of us; it’s in everyone.

In the book, Play: How It Shapes the Brain, Opens the Imagination, and Invigorates the Soul, there’s a sentence that reads…

When people know their core truths and live in accord with what I call their “play personality”, the result is always a life of incredible power and grace.

If you’re not seeing incredible power and grace in your child, it’s likely because she’s not living in accord with her “play personality” which is how we are each designed to flourish. In other words, she’s not “doing HER thing.” She’s doing yours, or someone else’s.

This book goes on to talk about Gillian Lynne, who was the choreographer for the musicals Cats and Phantom of the Opera. She was doing terribly in school because just could not keep still. She kept fidgeting and never paid attention to lessons. School officials went so far as to tell her parents that she was mentally disabled. So her mother took her to see a doctor…

“Look,” he said, and directed the mother’s attention to Gillian, who had gotten up and started moving to the music as soon as they left.  “Mrs. Lynne,” said the doctor, “your daughter’s not sick, she’s a dancer.”

I believe a child not “sick” or “lazy” or “lacks ambition.” They’re simply being weighed and measured in a manner in which they were never designed to be (note: also be aware that this can also happen when they ARE engaged in something they love).

As Albert Einstein says, “Everybody is a genius. But if you judge a fish by its ability to climb a tree, it will live its whole life believing that it is stupid.”

Or in the case of this article, if you judge a _______ by her dedication and commitment to softball, she will live her whole life believing that she is lazy. I can’t tell you what goes in that blank for your child. That’s something you get to discover with her! The journey, and that discovery, is an amazingly beautiful experience. Don’t miss out on it because you’re too busy trying to force your child’s “square peg” into the “round hole” you want them to fit into.

Now my daughter is 15. We talk about her softball days from time to time. She says she remembers when we “always” used to tell her she was lazy or “always” called her lazy. Pretty sure people would look like us like we were crazy if we said anything remotely like that now.

But I’m sure those words affected her in some way. She’s more or less been able to overcome the issue we created, but how much better would it have been, for us all, if we never went there to begin with! Now we all know she’s anything but lazy. We just hadn’t given her the right chances to show us back then. 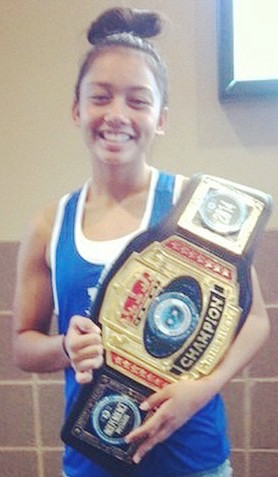 Since then, she’s become a Ringside Boxing World Champion. She holds an American Record in powerlifting. And she just won her weight class in wrestling divisional championships, in her second season of wrestling as a sophomore, in the biggest weight division in the conference. She’s also held her own in local CrossFit competitions alongside adults.

These kinds of experiences don’t happen to lazy people!

That’s four different athletic pursuits. In none of them does she show shred of laziness. (update: now that she’s another 5+ years older, she also become an All American, been nationally ranked as a collegiate wrestler, and won a National Wresting championship at the collegiate level as well).

Depending on how you want to look at it no one is lazy, or everyone is lazy in some way.

For example, I’m a mother of 8, most people agree, that alone means that I can’t possibly be lazy. But if you just pick out areas I have no interest in at all, like crafts and sewing, you could probably call me “lazy.” After all, I never once made any attempt to make clothes for any of my kids, while my very own sister makes more than half the clothes her 3 kids wear! Not to mention their Halloween costumes.

Does the fact that I’ve never handmade my kids clothes or costumes, and I just went out and bought it off a shelf instead, mean I’m lazy?

No, it just means I’m not interested in sewing. My sister, on the other hand, tried a few sports, then stopped playing sports altogether. Does that mean she’s lazy? No, it just means she’s not into sports the way I was.

If we’re going to value ourselves, and each other, based on the areas in life we aren’t interested in or are weak, then we’re all lazy.

Why not look at it from a more positive and productive point of view?

There are no lazy children and no lazy people. Are we uninspired in some areas? Yes. That’s human. But it also means we are greatly inspired, and inspirational, in the areas where we were meant to shine.

So if your child puts forth very little effort in a sport, it doesn’t necessarily mean they’re “lazy.” It might just mean they aren’t that interested in softball or basketball or sports or sewing! And that’s OKAY. The sooner you stop holding on to things that aren’t mean to be, the sooner you can find what is.

Granted, it could also be that there’s something else going on in their lives (or even on the field) that’s simply sucking and draining all the energy out of them so they have nothing left in their tank for softball.

Still, that doesn’t mean their lazy.

It means they have another problem they need help with in order to clear the way for excellence.

Help your child(ren) find endeavors that light them up. You’ll never have to drag them to practice or lecture them on effort again.

But what if your child IS in an activity or sport you know they love, but they’re still struggling to reach their full potential?

I am 100% certain, something ELSE is going on that’s holding them back. They’re not just “being lazy.” What’s going on underneath what comes through on the surface as “lazy?” You’ve gotta do a little digging and get to the root. When you can get to the heart of the matter, you can unlock their performance <3

That’s why I love the work MVP Leadership Academy does. Athletes get to DIG DEEP into what’s really going on and why, then they get the tools, support, and training they need to make adjustments and help them get results in their confidence, their drive, their performance, and even their quality of life.

If that sounds like something you need to learn more about, contact me, tell me about the challenges you’re currently facing with your child, and I’ll connect with you to see how I can help <3

If that doesn’t sound like something you’re quite ready for yet, then the Think Like a Champ Journal for competitive female athletes may be a better first step for you 🙂