Sure Fire Way to Make the Same Mistake Twice

That’s it. If you don’t go hard, you make it tough to learn from your mistakes and tough to make sure they don’t happen again. Why? Because you’ll never really know if your “failure” happened because you didn’t go hard or because of some other issue.

Lack of effort can mask the real problem that caused the failure. It’s imperative that you go hard in order to properly troubleshoot your problems. 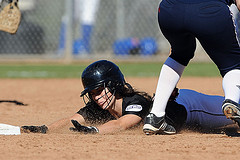 For example, if a player is running bases, doesn’t go hard and gets out, neither the player nor the coach know if they got out simply because they weren’t running hard or if they should have never been running in that situation to begin with.

What about those times you see a player sorta dive after a fly ball? If they don’t go hard for that ball, they’ll never know if that miss was because they shouldn’t have dove for the ball (it was too far away) or if they just missed it because they hesitated. Go hard and you’ll know the answer to that for next time!

How about that pitcher doesn’t throw her changeup “all out” and has it pounded? Tough to tell why it didn’t work. There’s more than one possible reason that pitch didn’t work, but throwing it without being fully committed to the pitch just adds one more possibility! Go hard and you make it easier to figure out what the real problem was in that situation.

If you want a weak “excuse” for your failures, continue to give half baked efforts.  Yes, it can be terrifying to do your absolute best knowing that you might still “fail” but it’s the only way you progress and grow into a better, stronger player or coach!