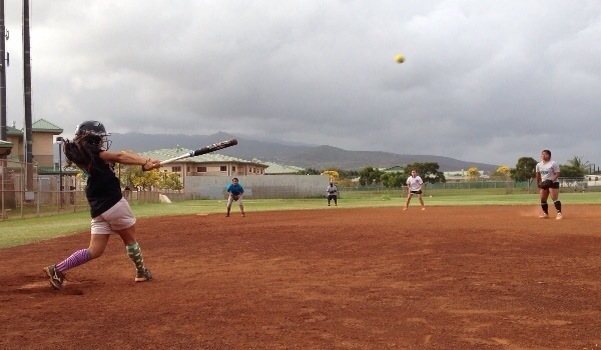 Over and over and over again I get emails from coaches and parents telling asking for help with players that hit well in practice but not in the game.

In a previous post I mentioned that a lot of that can be mental.

However, it could also be that you never practice hitting the way it’s performed in a game. Granted you can’t recreate a game environment entirely, but the mistake many coaches make is they take the decision making process out of all hitting drills. They do soft toss, tee work, front toss, hitting off a machine and in NONE of those drills do their hitters need to make a decision on whether or not they are going to swing.

That’s a HUGE problem which WILL show itself in game performances over the course of the season.

– recognize a pitch (speed, spin, location, etc)
– make a decision about whether or not they are going to swing
– THEN execute a good swing

When you only do hitting drills such as the ones mentioned above, this process NEVER happens in practice. Then in the game you expect players to flawlessly progress through this process and execute a good swing. That’s not a fair expectation.

That’s why coaches constantly look for the best drills and gadgets that allow their players to take the highest number of reps in the shortest amount of time for maximum effieciency. This is not a bad thing it’s just that…

2) more is not always better – being able to take a high number of swings in a short period of time is great, but remember what the point of your hitting practice is. Most times you’re trying to develop GOOD hitting technique and mechanics. That is NOT always accomplished by high reps in a short period of time which often leads to rushing through drills with little to no true engagement with what you’re doing.

If this means slowing down and taking less reps for higher quality, so be it!

Back to incorporating the decision making process in your hitting practice…
I DO like live hitting as a way of doing this. Do some kind of fastpitch hitting drill where the ball is coming toward the hitters and not every pitch is an automatic swing.

One of the simplest ways you can include the decision making process in your hitting practice is with a colored ball or numbered ball drill.

Colored ball drill
Mark your hitting practice balls with colored dots. If possible, use three different colors (only use one color on any given ball!).

You can use these in soft toss or front toss. The hitter will have to identify the color of the dots on the ball, then perform the appropriate action. Obviously the more/bigger dots you have on the balls, the easier this drill is. Remember, you can always start with smaller/less dots and increase the size/number of dots if you need to, but you can’t go the other way!

The simplest way to use numbers is to write either 1’s or 0’s on the balls.

Obviously, that’s a little more difficult. Now the hitter has to recognize the number, think about whether it’s odd or even, THEN execute the proper action. Yikes!

For example, use 1, 2, 3 (little tougher) and assign, hit/bunt/take accordingly.

OR you can use 0 (take), 5 (bunt), and 10 (hit). This set up seems to be easier for players because it’s pretty simple to associate 0 with “do nothing/take.” Big number/double digits/10 with “YES! Hit the ball!” and the small number, 5, with the “short game/small ball/bunt.”

No matter what method you choose, just remember to incorporate some kind of decision making process in your hitting practice from time to time. Don’t remove it completely, make every hitting practice rep a “go” ball, then expect your team to be “choosey” or “disciplined” on game day. Give them a chance to develop their brain and their swing in practice.

Pick a color drill
This one requires a little less thinking but still adds some decision making process to your hitting practice. Front toss two different color wiffle balls at the batter. AFTER you release (or right on release) you call out the color of the ball you want them to hit. The batter’s goal is to hit the correct ball. Simple but fun and challenging at the same time 🙂