Softball is not “just” an extracurricular activity 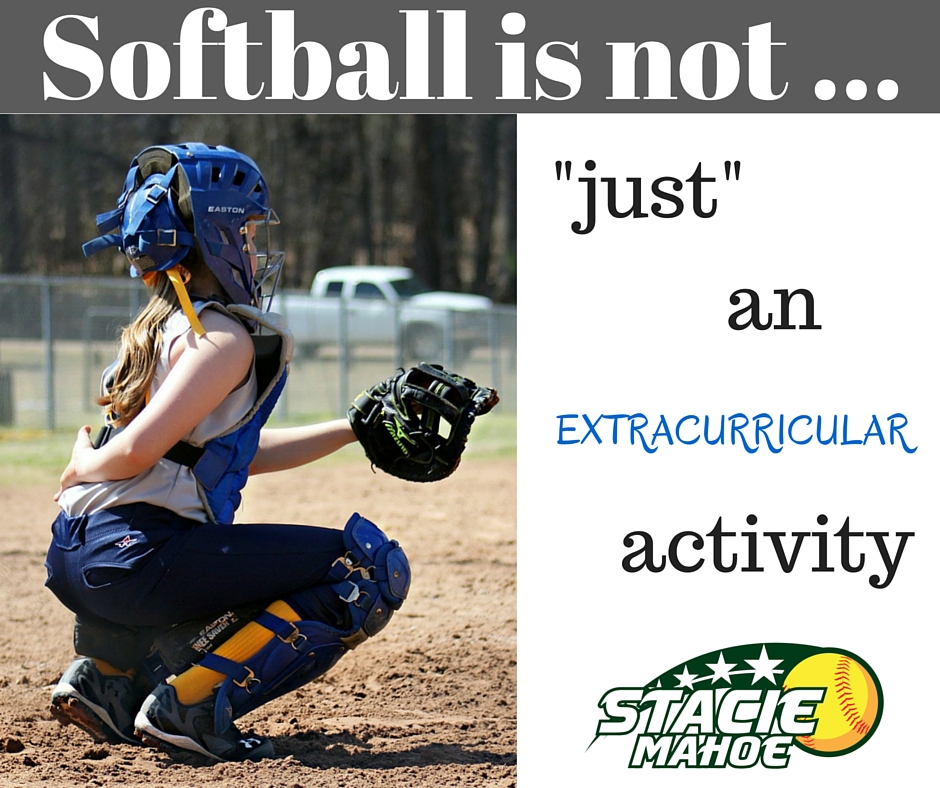 I believe we do our kids a disservice when we only emphasize the part of life that involves today’s educational system.

I recently heard a parent say that kids should be focusing on studies and graduating college in 4 years because it’s unlikely that their future earnings will come through sports.

News flash: money is NOT the only reason people engage in an activity (nor should it be IMHO). There’s SO much more to it than that.

When we honor all aspects of life, we help our kids become better human beings. When we show interest in and support them in things that’s are important to THEM, we help them create strong connections, not only to us, but to the world around them as THEY best understand it.

For some kids that involves sports and physical activity! Why are we discouraging kids’ participation in sports in a society where health is on the decline partially due to the fact that not enough people make physical activity part of every day life. This “it won’t pay the bills” mentality is part of why we’re in this crisis. We only value things that have a tangible or immediate “pay off.” This makes for unhappy people constantly pushing side activities that bring them joy and fulfillment in favor of what society deems “valuable” or “worth” doing.

Then we (as a whole) pass that on to our kids.

When we constantly tell a child what they *should* be doing, thinking, or spending time and energy on based upon what you feel will “pay off” later, you’re undermining their confidence in their ability to make decisions AND interfering with their opportunity to really get to know themselves, what they want, what lights them up, and how to make the most of THAT as they go through life.

You have a wonderful opportunity to work WITH them to sort that all out now.

Maybe they won’t have to spend the next decade (or two!) after college trying to figure out what they want to be when the grow up. Because you’ve already let them explore that given them the opportunity to understand how to hone in on it vs pushing it aside to follow the path everyone else thinks is best for them.

Isn’t that kind of the point?

If a child best learns and functions with sports or physical activity in their life, why are we so hard pressed to pull them away from it in favor of something else? Or place it as secondary to other aspects of life?

What about the athletes that don’t know what to do with themselves after their sport is done? Isn’t that often on of the arguments for pushing other areas of life on them?

It sounds like a valid reason to “encourage” or emphasis other areas of life.

But what if we just valued sports as a part of life vs making school more important than it? (or vice versa)

What if we simply accepted that both sports and school provide great value, often in ways we’re unaware of?

When we begin to see that everything has value, and also begin to value kids as they are, they’re less likely to form such strong “attachment” to any one piece of life. Yes, it might be a huge part of their lives for many years, but it’s also just sliver of a bigger whole. When our kids see the value in life and in themselves outside of just one arena, the transition from it onto the next season of life can be smoother and more seamless vs feeling like a quarter life crisis.

So again, it comes back to perspective. The perspective we choose influences everything.

The perspective we choose to view life through, as parents, often shapes the way ours children see life. How can we help them get in touch with and understand what lights them up from the inside out vs placing so much emphasis on the aspects of life that bring about external rewards (whether that reward comes in the form of academic awards, sports awards, money or any other form of outside recognition)?